If you’re selling a home, do you wonder which generation has the most active buyers today? The answer may lie in the most popular names of current homebuyers.

A new report shows that buyers with first names popular among Millennials had the biggest increases in home purchases in 2017.

This isn’t an exact science, of course. But it highlights an important point. Gen Y is claiming more homes today than older buyers. Their stories and reasons for buying are as unique as the names their parents gave them.

Whether you’re a Millennial, Gen-Xer or Boomer home seller, pay attention to demographics. Be mindful of what interests buyers from different age groups.

What the research found 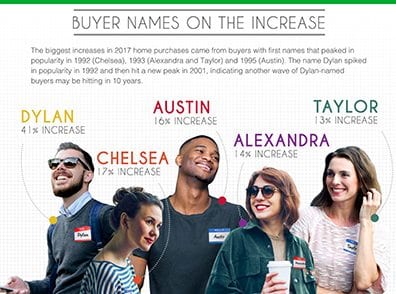 It offers further proof that Gen Y leads the buying pack and wants to own a home. Other evidence shows:

Older residents not selling a home

In addition, the study “provides data-based evidence that there are significant differences in homebuying behavior across generations,” said Blomquist. “Prospective buyers and their agents should consider this when appealing to sellers and other buyers who span different age groups.”

Here’s a way to put this data to work for you as a buyer: Obtain a list of homeowner names in neighborhoods you like. “Look for older generational names. Then, send them postcards or knock on their doors to see if they are interested in selling,” suggests Blomquist.

What’s the best source of money if you’re over 62? Home equity loan of reverse mortgage?

“There is other data that points to them more likely to age in place,” says Blomquist. “Note that the average homeownership tenure nearly doubled over the past 10 years.”

Reading between the research

“We weren’t sure what to expect when diving into this data,” he says. “We’re usually willing to try something new when it comes to analyzing the millions of publicly recorded real estate records we collect each year.”

Blomquist says his team didn’t have buyer names in mind when they first parsed the records. Moniker patterns began jumping off the page with closer looks.

“What stood out was the prevalence of popular millennial names among the top buyer names that saw the biggest increase in home purchases in 2017 versus 2016,” he says.

Another surprising finding? “The top five names spiked dramatically in popularity within a very narrow time period—1992 to 1995. This tells me that it’s not all millennials who are accelerating their home buying activity. It’s specifically those between ages 22 and 25 in 2017,” he says.

Blomquist notes that this study isn’t the last or only word on the subject.

“The increase in Gen Y names suggests that Millennials are buying more homes. But not all 80 million of them are buying at  once. And they’re probably not buying as quickly as previous generations.”

Also, “these Millennial names are not even close to the names that bought the most homes in 2017,” he says.

The top male names in terms of sheer volume of purchases were traditional ones:

All of these names saw declines in home purchases. Yet, if you want to better ensure that your future child owns a home, don’t give up on these time-tested names.

“Those are probably the safest names to go with,” Blomquist says. “But it’s the popular names of a given generation that drive more home sales for that generation.”